One of the biggest takeaways from The Knot's 2015 Jewelry & Engagement Study is the fact that marriage proposals are increasingly public affairs, with photographers often called on to preserve the moment, and social media at the ready to broadcast the big news. 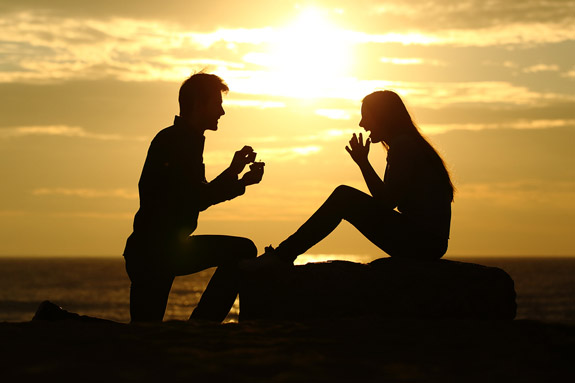 Forty-five percent of grooms said that they proposed in a public place, up dramatically from 34% in 2011. A scenic spot was chosen by exactly 28% of grooms, while 21% said they proposed at home and another 18% reported popping the question while on vacation.

The Knot noted that executing the perfect proposal and capturing the moment are high on men's priority list. Nearly half (48%) admitted they meticulously planned the proposal down to the last detail. An astounding 41% had a photographer or videographer capture the proposal as it happened.

Social media is the primary way newly engaged couples are alerting their friends and families about the good news. Exactly 79% of couples shared the excitement on social media within three days.

Four of 10 brides said they were completely surprised by the marriage proposal and 58% claimed they knew it was coming, but weren't sure exactly when.

Despite fast-moving advances in technology and communication, the majority of grooms are still mindful of traditions when they propose.

More than three-quarters of men (77%) asked for the father's or parents' permission before popping the question (up from 71% in 2011) and 85% proposed on bended knee.

The exact phrase, "Will you marry me?" was uttered by 89% of future grooms and nearly an equal portion (88%) popped the question with an engagement ring in hand.