The 5.6 million viewers — and the hosts — of ABC’s “Good Morning America” could hardly hold back the happy tears on Friday as the top-rated morning newscast staged an epic, romantic, surprise marriage proposal for 25 lucky couples.

Timed to coincide with the kickoff of the Valentine’s Day weekend, the outdoor event at New York City’s Bryant Park was part of a prize package the show awarded to men and women from across the country who — unbeknownst to their significant others — asked to be part of GMA’s biggest “pop the question” event ever.

The winners' partners were tricked into believing that they had simply earned a free Valentine trip to New York. 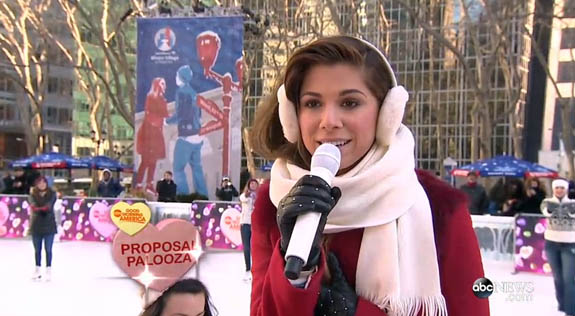 With the lovebirds gathered on the ice, the early morning event started off with Christina Perri’s special live performance of “A Thousand Years," the platinum hit she wrote for The Twilight Saga — Breaking Dawn, Part 1.

But, about halfway through the song Perri stopped singing and told co-anchor Lara Spencer that there was a technical problem.

“Hey, Lara, something is not right,” Perri said.

Spencer responded, “Is there audio? We've been having some problems. You know what, I think the only thing that could fix this is love.”

“Hey, guys, we may have been playing a little trick on you,” she said. “Partners, can you help this out. Can we solve this problem? What do you say? Let's do it. It's time. Take it away, love birds.”

Wearing skates and nearly in unison, 25 suitors awkwardly dropped to one knee on the frosty ice and proposed marriage. At this point, the focus switched from the Bryant Park ice to the ice that adorned the ring fingers of the surprised partners. 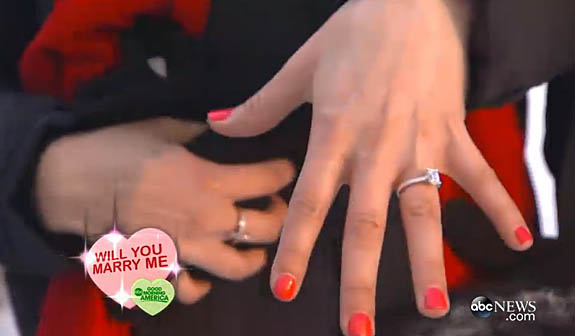 Spencer and Holmes interviewed a few of the couples and then reintroduced Perri, who was able to complete her performance, despite being a bit teary-eyed herself.

Back at GMA headquarters, host Robin Roberts said, “It really was romantic. We were here in the studio just swaying away. Nobody skated off so it looks like we went 25 for 25.”